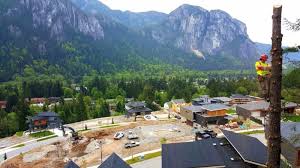 We’ve been getting a few of these windfirming contracts lately, and as it’s not a common thing outside the PNW I thought I would make a post about it. The job is to go along the edge of a logging cut-block and within a strip of specified width (usually 10-15m) thinning or topping each overstorey tree to reduce the likelihood of windthrow. It’s not done everywhere, mostly along edges that are most likely to blow down or edges alongside streams or roadways. It’s also commonly done with a saw on a helicopter longline, depending on the trees and location, the cost of climbers vs helicopters varies. In most places it’s possible to pendulum from tree to tree with a grappling hook (aka claw), reducing the amount of vertical climbing. It’s common to do 7 or 8 hundred vertical (up) feet a day. All climbing is done with spurs.

GET A QUOTE NOW!

" I think South Okanagan Tree Works did a fabulous job in removing this tree for us. Great work, fantastic pricing and Andrew is truly amazing!"